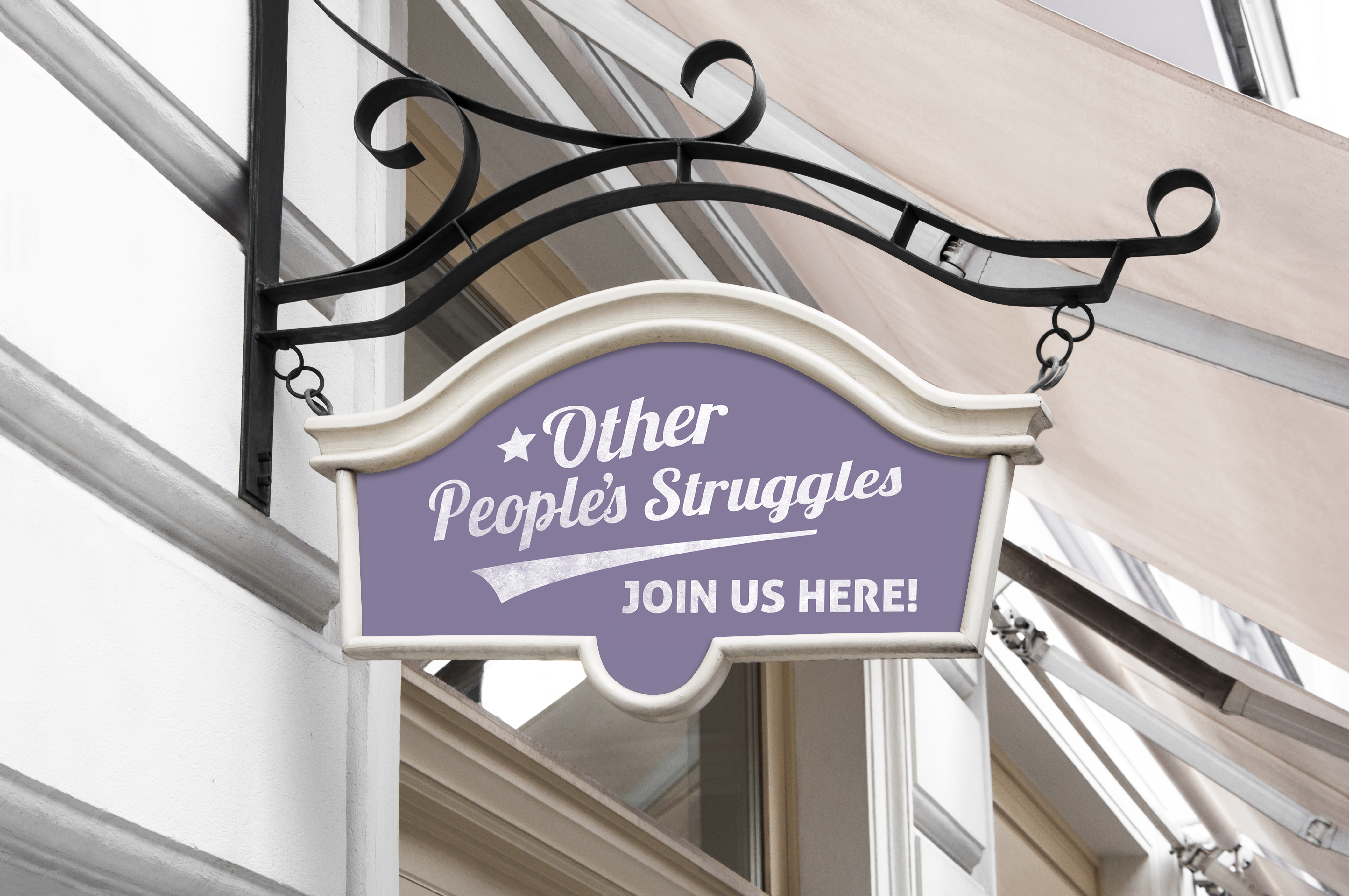 Other People’s Struggles has been my main research project over the last three years. It is an attempt to answer a question in the literature on social movements which has not been much asked, or well answered. Why and when do ‘outsiders’ participate in social movements from which they do not obviously stand to benefit? Why and when is their participation welcome to those who do stand to benefit , and why and when is it not?

Social movement theory terms such outsiders conscience constituents. They are thought to be important because they sometimes help to get social movements started when the beneficiaries are unable to co-operate sufficiently to achieve their goal. This lack of co-operation is quite common, because even sharing an interest with other beneficiaries is not always sufficient to motivate participation. A rational, self-interested beneficiary will ask herself not only what the goal is worth to her, but how far her own participation is a necessary condition of achieving it. It may be that she can take a free ride on others’ participation, and secure the goal without needing to do anything herself. Conscience constituents, self-propelled by their own consciences, can be a useful stimulus for collective action. Acting as unpaid entrepreneurs they can help latent movements get started or grow, by providing the initial confidence or organisation to allow rational self-interest to promote co-operation.

In chapter 1, I consider the account given of outsiders in existing social movement theory. I provide a critical account of the theory of the conscience constituent. I develop a new definition, based on motivations rather than expected outcomes, renaming the conscience constituent as the adherent: someone motivated to participate in social movement in order that others should benefit. The adherent can be contrasted with the constituent, who is motivated to participate by standing to benefit herself.

I also distinguish between four orientations – the outward, expressive, empowement and solidarity orientations. Social movements are not only oriented to power: that is, to the pursuit of already-formed – or crystallized – interests. They are also concerned with expressing historically submerged identities and unappreciated needs, and with empowering people who have been denied autonomy to act for themselves. I predict that the value of the adherent will vary according to the orientation of the movement’s work, as well as the movement’s ambition, by which I mean the extent of the changes that would constitute success for it.

MOTIVATIONS OF THE ADHERENT

In chapter 3, I turn to the question of motivations. How and why are adherents motivated to participate in other people’s struggles? I explore the different motivations that have been proposed to explain altruistic behaviour – including rational self-interest, moral obligations and social norms – and ask which of them are plausible explanations of the motivations of adherents, and how they are distinct from the motivations of the constituents. I also offer my own account of what motivates adherents, dominated by self-owned moral obligations to others and disjoint norms of service. This is what, for the conscience constituent, conscience is. Having distinguished between participants on the basis of motivation, I make some predictions concerning how they will respectively behave. Does it matter that some participants are motivated in one way – as beneficiaries – and others by conscience (and other ways)? In what types of work might it matter? And what sorts of problems might it create?

CAUSES AND COMBINATIONS IN THE LONG NINETEENTH CENTURY

In chapter 4, I provide some worked historical examples to provide an initial exposition of the theoretical arguments so far. I look at social movements in the long nineteenth century. Using the distinctions made concerning motivation in chapter 2, I distinguish between causes (made of of activists motivated by disjoint norms) and combinations (made up of activists motivated by conjoint norms). I use this framework to show why the place of ‘outsiders’ (now renamed adherents) differed between the metropolitan anti-slavery movement of the late eighteenth and early nineteenth century, the Chartists of the mid nineteenth century, and poverty relief work in the Victorian slums in the late nineteenth century.

IN THE OUTWARD ORIENTATION

In chapter 5, I consider the dilemmas that arise in the outward orientation, when movements seek to define and pursue interests. The key difference lies between constituents who define and pursue their own interests, adherents, who define and pursue the interests of others. I focus especially on the work of representation, and the accompanying dilemma of accountability. I argue that adherents, as supposedly disinterested non-beneficiaries, can be effective as representatives, but that they may also be harder to trust. I distinguish between three types of adherent – the advocate, the champion and the ally – in terms of their degree of independence of those they represent and their exposure to risk. The chapter also considers the difficulties that may arise when a movement is defining its interests. There is a risk that the ability of the adherent to frame the movement’s demands – in certain ways an asset – can be a liability if it simplifies or misrepresents an emerging demand. Whether this is so or not, I argue, depends on how crystallized the interests are, and on the ambition of the movement.

IN THE EXPRESSIVE ORIENTATION

In chapter 6, I turn to work in the expressive orientation, which concerns the articulation and expression of needs, identities and desires. The difference here lies between constituents, who express their own identities, and adherents who help to express the identities of others. The dilemma here is one of authenticity, and it turns on questions of provenance: how far the identity is grounded in shared and understood experiences. When the identity is expressed in terms of needs and experiences which she shares and understands, and which have already helped to secure her own identity, the adherent may be well placed to help. When they are are unshared, she is a less possible and less useful ally. In this chapter, I also consider the dilemmas of closed identity work, in which constituents isolate themselves to secure their identities; and the difficulties of attempts by adherents to ‘cross over’ to seek to share the identities of the constituents.

IN THE EMPOWERMENT ORIENTATION

In chapter 7, I examine the empowerment orientation, in which movements work on themselves, developing their capacities as activists. I argue that the adherent can help to empower others, but empowerment is ultimately non-transferable. No one can be empowered vicariously, i.e. on their behalf. Empowerment is also persishable: it must end or fail. Whether adherents can help empower others turns on whether the capabilities the constituents seek are ones that they do not themselves possess (and others do); or, more ambitiously, ones they already have but have not yet discovered; and on whether they are willing to acquire such capabilities passively – as pupils, in other words – rather than, more ambitiously, through interactive discussion between teacher and taught.

IN THE SOLIDARITY ORIENTATION

In chapter 8, I explore the dilemmas that arise in solidarity work aimed at enhancing group cohesion. I consider first whether constituents and adherents can share prefigurative work, aimed at ‘living the change they seek’; and secondly whether they can derive the same emotional satisfaction from the life of the social movement. This chapter also offers an important modification of contemporary theory concerning emotions in social movements. Such theory proposes that people are motivated into collective action by emotions as well as by rational calculation. The chapter argues that, in addition, the emotions that motivate the conscience constituent differ from those that motivate the beneficiary constituent. They include, for example, guilt, indignation, pity, pangs of conscience and the altruistic ‘warm glow’. These disjoint emotions – felt for or in relation to others – are hard to share with those fighting a battle on their own account, whose own emotions – hurt, anger, pride – shared conjointly with each other, are hard to share with the conscience constituents. This, it is argued, may also impede solidarity within the movement.

ON HAVING TO BE WHAT WE CANNOT BE

In the last four chapters of the book, I look at the place of the adherent today. In chapter 9, I try to sum up the findings of the historical case studies by looking at the long-run changes, and making a conjecture about the trajectory they indicate from the beginnings of modern social movements to the late modern present day. This takes the form of a claim that the adherent now ‘has to be what he cannot be’. I explain the underlying changes that have brought about this paradoxical state of affairs.

In chapter 10, I define and assess five approaches to address the late modern dilemma described in chapter 9, drawn from contemporary social and critical theories. These involve loosening the obligation to be what one cannot be; denying the impossibility of being what one cannot be, being it anyway; sharing incompleteness, and beginning from equality. The chapter argues that that each response has its merits, but none of them produces answers with which all movements can be content.

In chapter 11, I outline an emergent approach, which I term becoming- work, to consider whether the older dilemmas are changing shape, or even being solved. I define the approach, and explain how it alters the classic dilemmas of adherence set out in chapters 5, 6, 7 and 8. I also describe some contemporary and emerging examples of the approach, especially in alter-globalisation politics and queer politics, before concluding with some suggestions for future work on adherence.

In chapter 12, I summarise the arguments of the book, before concluding with some suggestions for future work on adherence.

Adherents, according to my argument, are motivated by disjoint moral obligations and norms of service. To judge whether and how the problem of the adherent varies, it therefore has to be examined empirically across a long historical period, and also in depth. The book is therefore supported by a series of historical case studies. Taken together, they constitute an historical account of the playing out of some of these dilemmas as they occurred in a particular historical location (Britain) over the last hundred and fifty years or so. The historical case studies are described here.

Some other pieces of writing – conference papers, blog posts and other short reflections – also consider adherence.

I have explored the question of whether adherents and constituents can share the same emotions here.

I have also written a short piece on a William Blake poem which forms a sort of preliminary, orienting journey in to understanding what motivates people to help in other people’s struggles.

Another piece, which comes at the end of the project rather than the start, concerns Oscar Wilde’s socialism, ambivalence and adherence.

I have also written several posts about the main concepts in the book, which are linked below.